Most locals, by now, have heard of St. Louis’ celebrated chef, Lou Rook III.
Rook has been working in local kitchens for 40 years. He began his career as a stock boy at age ten at his father’s root beer stand. Within two short years he was cooking and thus began his love of food. In college, he developed an interest in the science behind cooking – what makes bread rise, how to make the perfect pie crust every time and what elements go into a classic sandwich.
After finishing up at the University of Missouri, he went on to graduate from Culinary Institute of America in Hyde Park. When his parents opened a white tablecloth restaurant, he moved back home and began preparing higher-end menus and cultivating an appreciation for finer foods. From there, he worked at Cardwell’s in Clayton and then co-owned Grappa, a café in the Central West End for a few years.
Rook is perhaps most well-known for helming the ship at Annie Gunn’s, celebrated for their dry-aged steaks and extensive wine list, for the past 25 years. He had just started working at Harry’s downtown (now closed) when the flood of 1993 devastated the Chesterfield Valley, where Annie Gunn’s is located. A week after it was flooded with thirteen feet of river water, owners Thom and Jane Sehnert approached him with an opportunity that would change his life. They had decided to rebuild the restaurant and wanted Rook as an executive partner. As Annie Gunn’s was Rook’s long-time favorite restaurant, the decision was an easy one. Just ten short months later, Annie Gunn’s was back in business. It’s been a hugely successful, rewarding and unusually long partnership for the restaurant industry.
Another solid relationship is the one between Rook and his father, Lou II, whom he hired a few months after re-opening to be his day cook. It was an easy decision to have his dad by his side in the kitchen, just as they had done years prior.
Rook gained national attention after publishing his cookbook, Rook Cooks: Simplicity at Its Finest, in 2014. The collection of recipes was curated to inspire home cooks to try new things and to have fun in the kitchen. Included are favorite recipes of Rook and his customers that can be easily translated from the professional to the home kitchen.
“Put on some music, make some cocktails and dig in – don’t be intimidated!” he advises home cooks.
Rook’s cooking style can be described as fresh and creative. He doesn’t want to reinvent the wheel, but prefers instead to combine classic French technique with “New Italian” finesse, all with American cuisine as a backbone. He describes his approach to cooking as appreciating ingredients for what they are and “bending or extracting flavor.” For example, his elk Carpaccio is crafted with a calculated blend of flavors. He sears elk tenderloin extra rare and balances the slight gaminess with a sweet pomegranate molasses and tops it all with mild leek microgreens, heady alba white truffles, crunchy pomegranate seeds and flavorful chive oil. This would be paired with a full-bodied Syrah from Côtes du Rhône.
Another hallmark to Rook’s cooking is his commitment to and preference for just-harvested local produce.
“We do our best cooking when our local produce is flourishing. That’s where the flavor comes from.”
He also takes full advantage of the Smokehouse Market, located just next door, also owned by the Sehnerts. The Smokehouse is a favorite among locals in the area who drop in on their way home to pick up already prepared food or grab a great cut of meat to cook themselves. The Smokehouse butchers work with Rook to purchase the freshest meats and seafood. All of Annie Gunn’s meats are sourced from the Smokehouse Market and Rook produces all of the prepared-meats for the shop. Come for dinner and take something home with you to cook tomorrow!
When not in the kitchen, which is rare, Rook might be found at his favorite restaurant, Paul Manno’s Café, dining on his favorite dish, the Sicilian-style veal chop with arrabbiata pasta with peas and paired with a Borolo wine. 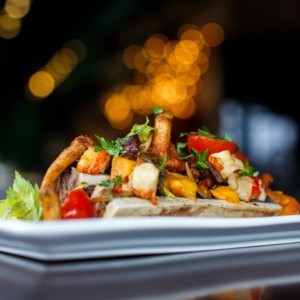