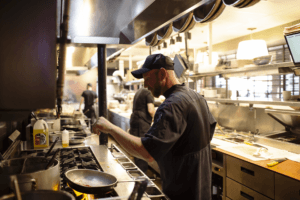 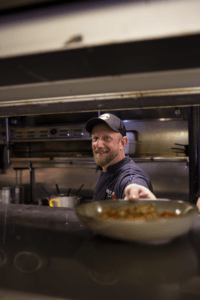 For Craig Corzine, executive chef at Billy G’s in Kirkwood, cooking is more than just a job. He sees it as a living, breathing process – one that allows him to stretch his creative wings and work toward something more than his own immediate satisfaction. And with rave reviews and lines out the door on a regular basis, his attitude to business seems to be working.
But it wasn’t always that way. Like many young men, Corzine – a South St. Louis native – started his culinary career in high school, washing dishes in the back of the South County location of Gingham’s Homestyle Restaurant, which closed its doors in 2013. His initial motivation was “running-around money,” and he returned to Gingham’s after a short-lived and lackluster stint at business school.
“I’m not a 9-to-5 guy, the thought of sitting in an office all day makes me cringe,” says Corzine. “I was getting a business degree and really didn’t even know why…I sort of fell away from that, realized ‘I don’t really know that this is where I want to fit in.’”
Around this time, one of Corzine’s friends invited him to take a culinary course at Forest Park Community College in St. Louis. He figured he might as well take courses to better cooking – the only craft he knew. By this point, he’d moved the ranks at Gingham’s, and now ran its kitchen. How did he get there in just a few years? The answer was as simple as showing up every day, consistently working hard, and working hard to earn every promotion that was offered.
At one point, he was actually looked over for a major promotion, because the managers didn’t think he’d be around for the long run. When he insisted he was, they made him co-kitchen manager with another, more inexperienced chef. He ended up in charge of running the kitchen, which he did for the next twelve years.
Eventually, business at Gingham’s began to decline – Corzine cites a lack of willingness to update menu or equipment to this downturn – and he took a job at Billy G’s as a line cook, initially to tide him over until something else came along. However, he found that Billy G’s had a more receptive attitude toward culinary creativity, a passion he never knew he had until now.
“People are actually doing real, legitimate cooking, and it’s exciting,” describes Corzine about his initial reaction to Billy G’s. “Getting here, I was really doing the first real cooking I’d ever done in my career. It makes me happy to come to work and have that creative outlet.”
He began as a line cook, but his persistent attitude got him a position as a sous chef during his first year, and executive chef – his current position – in his second. It was during this time he discovered how creative he could be in the kitchen, and he began to prioritize making the kitchen a welcoming place for his employees. Corzine says this is due to a shift in the industry, from the “old days,” where being a cook was seen as a more crude, unglamorous business, to the development of the kitchen as a place of professional trade and innovation, which he says is vital to the sustainment of the restaurant…and the happiness of its workers.
“My goal was never to be a celebrity-type chef or any of that stuff…I just want to come to work every day, and make sure my crew is happy and everyone’s as glad as they can be to come to work,” Corzine says with a simple shrug. “If we can work through a big dinner rush and still come out having a good time, laughing and joking about it, that’s just how it should be.”

Want to join the discussion?
Feel free to contribute!